Ah, The Ski Bus — A Rite Of Passage For Many Young Skiers, And Still Offering A Trip Through Nostalgia To Get To The Snow On The Other Side – Pacific Northwest Inlander 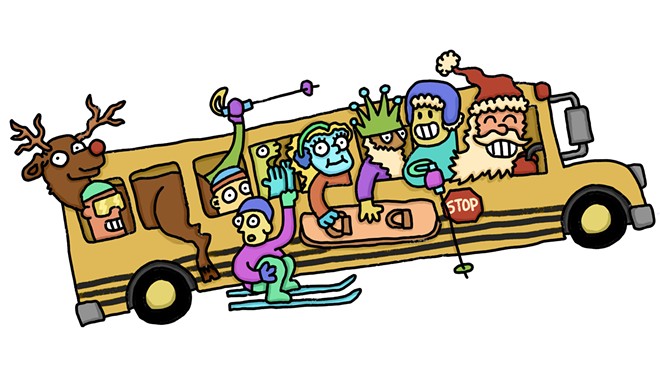 I’d be lying if I said I was thrilled the first time my parents dropped me off in front of the ski shop located in a strip mall of sorts. Of course, it’s hard to be thrilled about too many things early in the morning, in January, when you live somewhere around the 48th parallel.

It was cold that morning — the kind of cold that when you exhale, your breath turns to a cloud of ghoulish vapor that seems to just hang there, frozen in suspension. It was dark, too, since at that time of year the sun seems to never want to climb above the horizon and when it finally does, it takes forever to beat back against the frozen mist enough to let it’s golden rays shine through.

Under the strange glow of that early morning light, I desperately dragged my gear with me as I scanned the bewildered gazes for a familiar face in the crowd. Looking back on it all now, it’s hard to believe that something I came to love so much began with so much trepidation. But when you’re a junior high kid trying to figure out where you fit in, everything seems daunting. At last, I bumped into a buddy, and together we loaded our gear and then jumped on board what I would later come to realize was a magic carpet ride of sorts — the ski bus.

The world was a different and perhaps simpler place 40 years ago. Back then, it didn’t seem strange to pack a bunch of more or less unsupervised teenagers onto a bus and send them away for a day of revelry. I say unsupervised because that’s how I remember it. There may well have been some sort of loose supervision, but if there was, my mind has chosen to selectively repress that part of the experience.

These days, I suspect most parents would want nothing to do with sending their children off into the unknown like that, and that’s without even considering the current COVID aspect of life, which makes packing any group of people onto a crowded bus seem like a bad idea. That’s too bad, though, because there was enough life experience packed into one day starting and ending on that bus to cover a year’s worth of experience in the rest of the world.

Some of my fondest memories from those fun-filled ski bus days are of making friends, and this was a big one. When I climbed onto the bus, I’d typically only know one or two other kids. But as the day passed, and some of the awkwardness began to fade, I’d always get to know a few more. Chatting with these new friends as we bounced along would often open my eyes to new things. This was particularly true of the older kids I’d meet. It was from them I’d learn things like how to talk to girls, how to make your money go further in the cafeteria or how to pull the best prank on your buddy.

During the slopeside section of the day, one just couldn’t help but learn how to be a better skier. I was skiing all day, of course, so that helped. But beyond that, it was learning tips from other kids who skied a lot more than I did. I’m hesitant to admit that I might even have gleaned a little bit about responsibility during the course of a day. I had to learn the meeting spots, be on time for the pickup, and budget the day’s funds properly. I even learned that being friendly to others really helped get through the day more successfully.

While the type of ski bus I grew up riding might not be as present as it once was, buses of all kinds are still integral to the ski experience around the globe. In Salt Lake City, for example, people board the bus downtown, fully geared up for a day on the slopes with skis in hand. Buses are used all over mountain towns and ski areas alike to help alleviate the inevitable parking issues.

On a ski trip to Argentina, I learned that whole groups of young adults wear the exact same outfits and board buses for trips to the mountains. I’ve skied at a mountain where there is an abandoned bus hidden in the side country where skiers and snowboarders gather to take a break, socialize and leave behind stickers from whatever their home ski hill is. 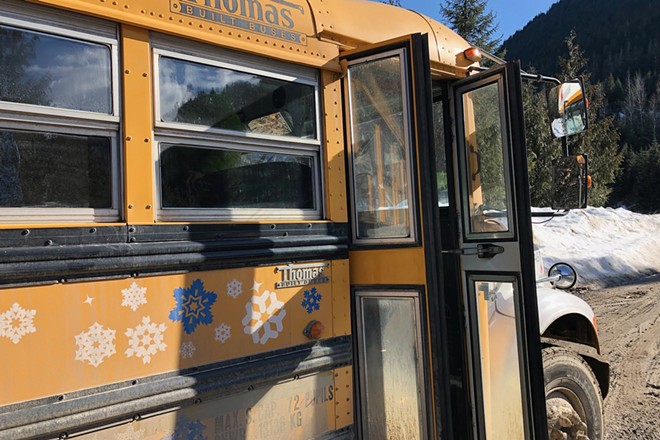 Learning on a ski bus is a whole different thing than a normal ride to school.

Perhaps my favorite ski bus I’ve learned about later in life is still an old-fashioned school bus, much like the first one I rode, that transports groups of like-minded skiers to a snowcat waiting deep in the Canadian wilderness to begin a multiday powder extravaganza.

I was fast asleep on that very same bus, returning from a cat ski trip when one of the many frozen ruts on what passes for a road in the woods of British Columbia tossed me into the air and out of my dream state. After four long days of shredding powder-laden slopes by day and sharing stories about the experience over adult beverages by night, I wasn’t the only rider on this particular magic bus ride whose eyelids were intermittently closing the blinds to the waking world.

In my slumbered state I had drifted off to the land of dreams, and I found myself transported back to the yellow school bus rides I had learned so much on in my youth. In that dream sequence, I was back in junior high, excitedly sharing stories with my buddies around me about the events of the day — the snow, the sun, the girls and the freedom of it all — as we bounded down the road toward the mall parking lot where the day had begun.

Suddenly awake now, as I landed back on my green vinyl-covered bench seat, I first looked around and then listened. What I saw and heard were the sounds of 40- and 50-something-year-old friends doing exactly what I had just been dreaming of, excitedly telling tall tales of the preceding day’s events. That’s when I realized that even though I was four decades and several hundred miles away, not much had changed. The ski bus is still one of the most magical rides you can ever be lucky enough to find. ♦

John Grollmus is a lifetime resident of the Inland Northwest, local restaurateur and backcountry ski guide. He loves all things outdoors, food of every kind and, more than almost anything, skiing. John can currently be found living with his wife and favorite human, Kim, near Hope, Idaho.