The US State Department has instructed the families of diplomats at the American embassy in Ukraine to begin leaving the country in the coming days amid concerns of a possible Russian attack, according to a report Saturday.

Citing unnamed US officials, Fox News said relatives of embassy personnel were told to start evacuating as early as Monday.

An official also said that next week the State Department was expected to urge Americans to start departing Ukraine on commercial flights “while those are still available.”

A State Department spokesperson said the United States is not “at this time” organizing an evacuation of American citizens from Ukraine despite rising fears of an unspecified military action by Russia.

In the event matters deteriorate, however, “American citizens should not anticipate that there will be US government-sponsored evacuations,” the spokesperson said, speaking on grounds of anonymity.

The State Department had already advised US citizens not to travel to Ukraine due to concerns about COVID-19. A department website also urges them “to reconsider travel due to increased threats from Russia.” 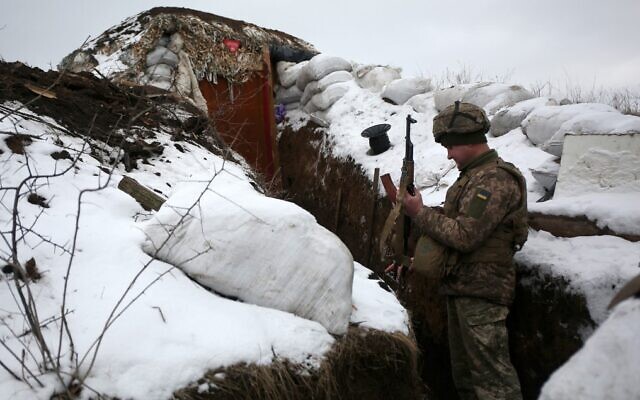 A Ukrainian serviceman checks his weapon as he stands in a trench on the frontline with Russia-backed separatists near Zolote village, in the eastern Lugansk region, on January 21, 2022.(Anatolii Stepanov/AFP)

The spokesperson also did not confirm media reports that families of American diplomats posted in Kyiv had been ordered to begin evacuating on Monday.

In that regard, the spokesperson said, “We have nothing to announce at this time.”

Western officials say Russia has deployed as many as 100,000 soldiers near the border with Ukraine. The White House has said Moscow could launch an offensive against the former Soviet republic “at any point.”

The Kremlin denies having any bellicose intentions but has said any de-escalation near the Ukraine border will depend on guarantees of no further NATO enlargement — particularly involving Ukraine — and on a reduction of the allied presence in Eastern Europe.